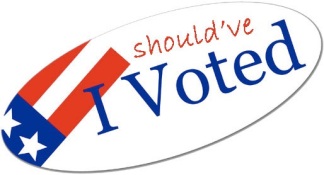 We hear it quite often, especially from younger voters:

“I am not planning to vote but my district is safe.”

There are several problems with this position.

First, it may not actually be true that your district is really safe. Polls get it wrong. Sometimes all the polls get it all wrong, badly wrong. All too often, this false confidence leads to “shocking” upsets.

Second, if enough people adopt this “but my district is safe” attitude they will make it unsafe. At some point, if enough people think like you, the bad guy wins. That is why the bad guys work so very hard to suppress voting and to convince you that your vote doesn’t matter. The people you don’t want in office don’t want you to vote.

Third, there are the softer arguments that appeal to civic duty, tradition, and social responsibility. We hear all these arguments and admonitions often enough, but these are seldom enough to overcome the pragmatic rationalization of “but my district is safe.”

But here is an argument that amazingly I have never heard articulated by a voting advocate. And that is simply… margins matter. Even if you are correct and your district is perfectly safe, the margin by which your side wins is immensely important.

If a candidate wins by only a slim margin, partly because you stayed home, they have less political capital to spend once in office. They do not have a clear and strong mandate to push through the kind of legislation you hope for. They are seen as vulnerable and attacked more aggressively next time around. Therefore, they feel far less secure and are less likely to support the kind of bold initiatives you want to see happen.

On the other hand, if by voting all you have done is increase your candidates margin of victory by one more vote, you have done something very helpful, substantive, and important. You have given your candidate more leverage and security to advance the agenda you want to see championed. By increasing their margin of victory, you secure support for them and for their agenda while demoralizing and discouraging would-be opponents and challengers.

So next time you think about skipping out on the voting process because you feel that yours would be a superfluous, wasted vote… think of margins. Think of your vote as adding one more coin on the scales in favor of all the things you care about. Think of it as a measurable data point to disillusion and discourage those on the wrong side of the issues. Think, margins matter!