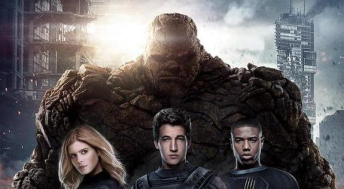 The Fantastic Four reboot premiered in movie theatres last weekend. Despite, or because of, the fact that I’m a huge superhero fan, I was really apprehensive about the release. The previews looked stiff, the casting looked highly questionable, it was yet another stupid origin story to “reboot” a franchise, and it was a completely “made up” origin story to boot. No one I knew was excited about it in the least. Even the director came out ahead of the release apologizing and making excuses for it. Without exception reviewers ripped it to shreds with Rotten Tomatoes giving it a disastrous 9% rating (one review).

So of course I went to see it.

This wasn’t unusual of me since I’ll see any superhero movie. And since I usually disagree with professional reviewers anyway, their unabashed bashing was a reverse-psychology encouragement for me. Moreover, I’d seen and greatly enjoyed the previous two Fantastic Four movies despite the fact that I’ve never met anyone gracious enough to utter even the most insincerely polite comment about those.

And – hey Mikey – I liked it! Although I seem to be the only person in the world who thinks so, I thought this reboot was worthy. It certainly didn’t fulfill all my preconceived ideas or hopes, but it wasn’t my tale to tell. How can I expect to enjoy any story-telling if I insist upon inserting all my own expectations? How can I ever be surprised and amazed if all filmmakers ever give me is exactly what I imagine in my limited imagination?

Which brings up a much broader observation… people are WAY too hard to please. It’s not even just that they’re hard to please; it’s that while they imagine that they want to enjoy things, they are really incapable of it. In short, often the problem is not the movie, it is us.

Maybe you just cannot appreciate the film.
I used to live in London and as a lonely bachelor I went to see movies frequently. I was continually amazed how all the Brits would go to see American comedies and chortle begrudgingly at all the most unfunny moments while sitting stone-faced though all the intended jokes. Then they would walk out of every film commenting on how unfunny it was. It’s not really that those films were not funny; they were just not funny to Brits. Similarly if you hate action films and go see one anyway, don’t complain that there were too many fist-fights and not enough kissing.

Maybe you have gotten too old and jaded.
When The Phantom Menace came out, all my coworkers complained vigorously and incessantly about how much Jar Jar Binks had ruined the movie for them. I found Jar Jar to be quite cute and funny, but most everyone universally hated him. I contend that Jar Jar was essentially exactly the same as the Ewoks those same people loved in their youth. It wasn’t the movies that changed, it was them. They have become incapable of enjoying movies through the same fresh and uncritical lens they used to, and they are continually disappointed that moviemakers don’t make any films that touch them like they used to.

Maybe you’re just a douche.
Too many people need to prove how smart and insightful they are by dissing everything. You know the type. They just can’t wait to impress their date or kids even as the credits are still rolling with their scathing critique. And if the movie is superb, they feel especially compelled to show that they are even more discriminating. “It completely ruined the whole movie for me that Gandalf’s staff had runes clearly etched in Valinor rather than ancient Moriquendi.” Really? How sad for you…

Now let’s be clear. I’m not suggesting that you should indiscriminately like everything and indeed some movies are deserving of unreserved ridicule. Battlefield Earth and Dune come to mind. But Fantastic Four has a lot to like. More often than not, your disappointments in life may say more about you than the movies or whatever other activity is disappointing you at the moment. If you don’t get something many others do, if you think nothing is as good as it used to be, or if you feel compelled to critique everything to prove your good taste, then it may just be you that is the only disappointing commonality in those equations.

I for one, am really, really happy that my standards are incredibly low. I can go see the Fantastic Four and enjoy myself while you lose out. How much better is that than setting seldom achieved standards and being disappointed in most everything life has to offer? And when it comes to people I associate with, I much prefer those rare individuals who can truly enjoy most everything, who can appreciate the filmmakers vision, rather than seek out the flaws and buzz-kill every bit of enjoyment for everyone.

1 thought on “Clobberin’ the Critics”