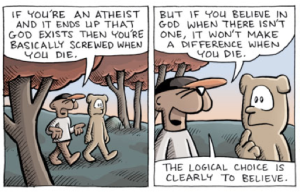 You’re probably familiar with Pascal’s Wager. It says that even if there is only an infinitesimally small possibility that god exists, the consequences of eternal reward or punishment far outweighs any earthly cost. Therefore, a smart person should “hedge their bets” and believe in god.

This is incredibly specious logic but it nevertheless holds powerful sway over a great many people. Lots of otherwise intelligent thinkers put it forth as a reasonable argument, even as an inescapable iron-clad rationale. But there are many flaws in it including the assumption that belief is a harmless hedge. In the end it is no more than a silly trick of logic that can equally justify anything whatsoever. By this logic, for example, the proposition you received via email from a Nigerian Prince might be legitimate. However small the chance that it’s real, isn’t it worth responding? In fact, the Nigerian Prince is far more likely to be real than is god. Such a prince could actually exist.

But you might reject that argument with yet more pseudo-logic. You might argue that only heaven is sufficient reward to offer compelling enough stakes to accept Pascal’s Wager. And I then counter by suggesting right here and now that you cannot get into heaven unless you give up ice cream. Regardless of how small the chance that god only favors those who prove their faith by forsaking ice cream, Pascal’s Wager demands you give it up. But I doubt you would accept that wager and actually swear off ice cream.

We reject most such nonsense out of hand. Here is yet one more flaw of Pascal’s Wager. We apply it only to one extremely specific assertion and reject an infinite number of others even though they are equally legitimate according to the logic put forth. You can counter yet again and say, well but I cannot play all possible lottery games, and I choose to play this one. Fair enough, so I can counter your counter. This logical fencing goes on and on unendingly without resolution. Playing mental games is something we humans do extremely well.

But why do we reject the same logic for pretty much anything else except the god proposition? We reject it because such logic is clearly stupid. And this brings us to yet another problem with Pascal’s Wager. There is actually in fact no possibility, none, nada, nil, zero, absolute zero, that god actually exists. Someone will in fact actually win the $100M lotto, so that might be worth a $2 ticket by Pascal’s logic. But no one can actually go to heaven because it does not exist. And you cannot claim “but it could” unless you really are equally willing to ACT ON every other impossible proposition.

This illustrates a fundamental problem with logic. As powerful and important as it is, logic has limitations. Thinking that abstract logic necessarily reflects reality can be like a Chinese Finger Trap. I just read an interesting book by Jordan Ellenberg called “How Not to be Wrong: The Power of Mathematical Thinking” (see here). I do recommend it highly. But in it he twice states emphatically that “reason cannot answer the question of god.” If that is true, then it is our reason that is flawed. And it’s easy to see how. Ellenberg is a mathematician. Even a mathematician can become too familiar and comfortable with mathematical concepts like infinity that have no actual basis in reality. Our minds can conceive of symbols and rules of logic that cannot exist in reality. God is one of those. Pascal’s Wager is one of those. It is a human conceptual model that leads to seemingly incontrovertible but nevertheless absurd conclusions.

To illustrate the problem of blindly accepting a “logical” argument without insisting upon testing that logic against reality, consider Zeno’s Paradox. In the 5th century Zeno gave us his famous paradox that says that since we cannot arrive at our destination without infinitely cutting the remaining distance in half, we can never actually arrive at it. The “logic” of this proposition has confounded thinkers ever since as it is extremely difficult to refute by the rules of logic. But a guy called Diogenes the Cynic disproved it by simply standing up and walking across the room.

We humans have an amazing capacity to imagine things outside physical reality and to conceptualize logical systems of rationality that are imperfect in describing that reality or that extend beyond physical boundaries. But we have to be careful that our own cleverness does not make us stupid. Get up and walk across the room. God does not exist and religion is not a harmless hedge.

Here’s the bottom line. If your system of logic leads you to the conclusion that god might exist or that you cannot ever reach the other side of the room, it’s because your system of logic is flawed or ever-extended or you just want it to be true. If your logic cannot disprove flying pigs or gods, you are not thereby proving that god might actually exist. You are merely encountering the limitations or failings of your logic.

And to my agnostic atheist friends who refuse to say with certainty that god does not exist, if you allow for any possibility that god might exist, you have essentially lost the argument. You have admitted that Pascal’s Wager is reasonable and that belief and religion are therefore reasonable. You may think you can logic your way out of that shifting maze, but that only leads to endless ridiculous arguments that mostly serve to give undue credibility to the ridiculous.