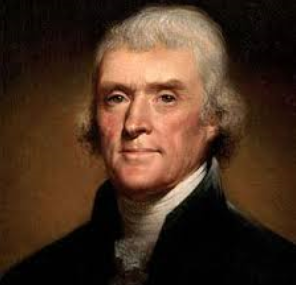 Thomas Jefferson was our Einstein of social and political science. He had an uncanny ability to understand human behavior and to envision what would ultimately grow from the seeds being planted in his times. Because of his visionary insight he fought for many years with his contemporaries, including his protégé Madison, to convince them to adopt several key provisions into our new Constitution. In fact he threatened to dismantle the effort to build a new nation if they were not included. He was adamant that a nation without these essential protections would be worse than none at all.

The first was Separation of Church and State, for without that protection he foresaw that our secular freedoms would inevitably be corrupted into a Theocracy. Jefferson would probably be relieved to see that we still do protect our wall of separation and that it offers some protections against Theocracy, but he would probably still be shocked and disappointed at the extent to which religion has succeeded in subverting or bypassing that wall.

The second thing he insisted upon was a ban against a standing army, for he feared that a standing army would only ensure perpetual war and war-profiteering. On this Jefferson would most certainly be horrified and most gravely disappointed. We do have a standing army that is only in principle under the command of a “civilian” President. In truth his worst fears in this regard have been realized with our huge standing army and the almost irresistible profit motive that ensures unending warfare.

The third thing Jefferson fought for was protections against corporations, for he saw that without very strong protections, our nation would inevitably be coopted into a Corporatocracy to serve the interests of corporate enterprises. He feared that these ravenous “wolves at the door” as he called them would eventually devour the government.

Jefferson did win this battle – for a while. The founders explicitly and deliberately never used the word “corporation” in the Constitution because they feared that merely by mentioning the word, corporations would be conferred with some status. For our first 100 years or so, most States had extremely stringent laws in place to prohibit any political action whatsoever by corporations. In fact, until as late as 1950 some states still had laws on the books forcing companies to disperse completely every 20-40 years to prevent them from amassing too much power and wealth that could corrupt the government.

When did the protections Jefferson put in place all fall apart? The root is the 1857 Dred-Scott decision that essentially said that people could be property. This resulted in the Civil War and the Civil War had the horrible side-effect of creating a monstrous gun industry (and a gun-culture) in America as the government cranked out untold numbers of guns that eventually ended up in the general population. The second corporate behemoth that was created by the Civil War was the rail industry as President Lincoln pumped huge amounts of money into rail to mobilize his war effort. These newly giant corporations helped win the war, but also became corporate monsters with new-found wealth and appetite for more.

Unsatisfied with accepting the corporate restrictions that had held corporate influence at bay since the Constitution, the rail industry started to direct its wealth into politics in an explicit effort to dismantle corporate restrictions on political influence. In the 1875 Santa Clara County vs. Southern Pacific Railway case, the claim was put forth that the 14th amendment protected companies as persons. The court explicitly ruled that “it made no ruling” on this assertion. However, in a published headnote the reporting journal “mistakenly” said that it did so. This was completely erroneous and absolutely non-binding, but yet law students to this day believe that personhood for corporations was actually part of the ruling.

It all went horribly wrong from there. A subsequent court cited this mistaken report as precedent and conferred rights upon companies as persons, even though no such precedent existed. By doing so, they set an actual binding precedent that impacted dozens of subsequent rulings leading right up to our most recent one which essentially gives corporations unlimited and unfettered power. Citizens United gives them such power that the dictates of corporate greed now arguably overwhelms any other institutional force working on behalf of the social good.

And the irony is that even the citation in the 14th Amendment used to justify this claim of personhood in Santa Clara County was false. Throughout that section, the authors of the Constitution refer to “natural persons” to explicitly exclude corporations. In only one little clause, they omitted the word “natural” totally by mistake, and this omission has served as the ultimate Constitutional basis for all of the rights of personhood that corporations have won.

Citizens United was a horrible, horrible decision based on a tragically comical sequence of false legal precedents. If Thomas Jefferson were here today he would most certainly be crushed to see that the wolves are no longer at the door, they have the run of the house.

I am glad to see Jefferson is not here to see his worst nightmares for our nation come true. But none of these alone are the Grand Nightmare I refer to. Jefferson’s grand nightmare would be the truly horrifying synergy of these three anti-democratic forces working together; religious zealotry fueled by corporate power and greed wielding the power of a huge standing army.