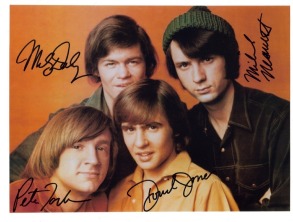 For those of you under 50, The Monkees were a band that was big in the 1960’s. Though they started out as a marketing contrivance by record producers hoping to compete with the Beatles, they quickly asserted their independence and sang out with their own unique voice to help define the times we lived in. For many pre-teens like me growing up then, The Monkees were incredibly influential in shaping our worldview.

It is difficult to analyze what made them so influential for so many. Attempts to do so only diminish their uniqueness, like describing a frog by dissecting it. Perhaps it was partly the innocent seriousness of their music and lyrics. Perhaps it was partly their counterculture attitude and their defiant questioning of establishment norms. But it was also the damned catchy way they did it, with unfailing musicality and uplifting positivity underpinning their protest messages, so pop and so unlike the relatively somber dirges of Dylan and many other folk era voices.

Their influence manifested in little ways like a Daydream Believer posing the question “how much baby do we really need?” It inhabited their observations about suburban life in Pleasant Valley Sunday. And it was reflected in the angry backlash of mainstream culture shouted out in Randy Souce Git.

No where was their magic more deeply felt by me than in the music and lyrics of a song called “Shades of Gray.” Like the soft murmurs of a siren song, this unassuming little ballad draws the listener deep into heart of the human condition. This magical spell permanently transformed many of us kids from the dogmatic, religious worldview of black and white morality into a generation cursed evermore to perceive a world revealed as an ever shifting kaleidoscope of greys.

Those lyrics were immensely powerful in 1966, and they are just as relevant and meaningful today, 50 years later- especially so after our last election.

But please don’t just read the lyrics. The music and the harmonies are so gorgeous, you really have to just listen… really listen.