Whether it be in science or business or politics or popular culture, we expend an inordinate amount of time and effort trying to figure out why people do whatever people are doing. We seem to have more analysts than actors, all desperately trying to explain what motivates people, either by asking them directly or by making inferences about them. For the most part, this is not merely a colossal waste of time and effort and money in itself, but it stimulates even greater wastes of time and effort and money chasing wildly incomplete or erroneous conclusions about why we do what we do.

Asking people why they did what they did, or why they are doing what they are doing, or why they are going to do what they are going to do, generally yields useless and misleading information. It is not clear that people actually have distinct reasons they can recognize let alone articulate. It is quite likely in fact that most of the decisions we make are made unconsciously based upon a myriad of complex neural network associations. These associations need not be rational. These connections don’t need to be internally consistent to each other or related to the actual outcome in any way. But in our post-rationalizations and post-analyses we impose some logic to our decisions to make them feel sensible. Therefore, the reasons we come up with are almost completely made-up at every level to sound rational or at least sane to ourselves and to those we are communicating to.

The truth is, we can’t usually hope to understand our own incredibly complex neural networks, let alone the neural networks of others. Yes, sometimes we can identify a strong neural network association driving a behavior, but most determinative associations are far too diffuse across a huge number of seemingly unrelated associations.

The situation gets infinitely worse when we are trying to analyze and explain group behaviors. Most of our shared group behaviors emerge from the weak-interactions between all of our individual neural networks. The complexity of these interactions is virtually unfathomable. The challenge of understanding why a group does what it does collectively, let alone figuring out how to influence their behavior, is fantastic.

If you ask a bird why it is flying in a complex swirling pattern along with a million other birds, it will probably give you some reason, like “we are looking for food,” but in fact it is probably largely unaware that it is even flying in any particular pattern at all.

So why point all this out? Do we give up? Does this imply that a rational civilization is impossible, that all introspection or external analysis is folly?

Quite the contrary, we must continue to struggle to understand ourselves and truly appreciating our complexity is part of that effort. To do so we must abandon the constraints of logic that we impose upon our individual and group rationalizations and appreciate that we are driven by neural networks that are susceptible to all manner of illogical programming. We must take any self-reporting with the same skepticism we would to the statement “I am perfectly sane.” We should be careful of imposing our own flawed rationality upon the flawed rationality of others. Analysts should not assume undue rationality in explaining behaviors. And finally, we must appreciate that group behaviors can have little or no apparent relationship to any of the wants, needs, or expressed opinions of those individuals within that group.

In advanced AI neural networks, we humans cannot hope to understand why the computer has made a decision. Its decision is based upon far too many subtle factors for humans to recognize or articulate. But if all of the facts programmed in to the computer are accurate, we can probably trust the judgement of the computer.

Similarly with humans, it may be that our naive approach of asking or inferring reasons for feelings and behaviors and then trying to respond to each of those rationales is incredibly ineffective. It may be that the only thing that would truly improve individual and thus emergent thinking are more sanely programmed neural networks, ones that are not fundamentally flawed so as to comfortably rationalize religious and other specious thinking at the most basic level (see here). We must focus on basic fact-based thinking in our educational system and in our culture on the assumption that more logically and factually-trained human neural networks will yield more rational and effective individual and emergent behaviors. 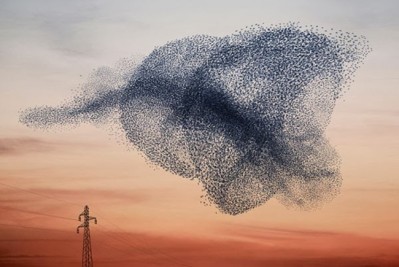 I am eternally fascinated by swarm intelligence and emergent behaviors. These terms describe the phenomenon by which individual organisms, following only simple local logic without any wider intent or awareness, contribute to highly complex and far-reaching behaviors that “emerge” or arise out of their collective activity.

The most observable examples include bird flocking, animal herding, fish schooling, bacterial growth, and ant colonies. Ants, as the most dramatic example, collectively create extremely complex bridges and nests, even though no particular individual organizes that activity or is even aware of it.

The amazingly complex creations of ants emerge from very simple individual logic such as “if another ant is on top of me, stop moving.” From this kind of deceptively simple behavior, ants collectively exhibit astounding feats of mass migration, swarming, tactical warfare, nest construction, and engineering. If however, a significant number of ants were to abandon their “belief” that it is their responsibility to hold still while another ant is felt upon their back, then their ability to create bridges and nests could collapse, and perhaps their species would as well.

What intrigues me most about this sort of swarm intelligence is the intriguing certainty that we humans collectively exhibit our own highly complex emergent behaviors. Even though none of us intend it, each of us nevertheless contributes to the emergent behaviors of our collective population, just as if we were merely cells in some greater human super-organism.

Therefore, the basic rules of logic that we live by as individuals likely do contribute rather more directly than we imagine to the large scale behavior of our species. For example, if we base our everyday logic on the assumption that god does or does not exist, we profoundly alter our collective behavior accordingly. Belief is not then merely some personal thing. It has profound consequence. Religious believers intrinsically know this to be true, that their belief fundamentally shapes the world we live in, and that is why it is so important to them to internalize, express, and evangelize it.

While Christians inherently believe that their religion produces what they feel are desirable emergent behaviors, many atheists conclude that they are wrong. We conclude rather that a personal religious worldview results in highly damaging emergent behaviors like bigotry and intolerance, gullibility, susceptibility to manipulation, disregard for the planet, and even warfare. We conclude that a personal belief in god is, in significant part at least, responsible for swarm behaviors like gun violence, terrorism, torture (see here), and jihad.

Therefore, we atheists should trust that there are no “benign” religious beliefs. We should never doubt that our simple rule of logic, that we believe in facts and reason not in gods, serves our species far better moving forward. We must trust that our personal atheist thinking, when expressed through a sufficiently large number of individuals, will indeed result in emergent behaviors that are more ethical than dogmatic, more fact than fantasy based, and more focused on our lives and our planet right now rather than life ever after. We must trust that atheism will better give rise to the more enlightened swarm intelligence that we so desperately need if we are to survive as a species.

Religion is a prime example of “swarm stupidity” in humans.