When I wrote my 2008 book Belief in Science and the Science of Belief (here on Amazon), I intentionally treated belief as just, well – belief. I intentionally softened any characterizations that might seem excessively inflammatory and personal. But in this more intimate setting amongst friends like you, we can ask whether the word belief is far too weak and benign, even inaccurate, to describe many of the assertions of the Religious Right.

Remember the formal debate between Bill Nye and Ken Ham on creationism? Ham challenged Nye to debate the topic and the notable exchange took place on February 4th, 2014. You can find the debate online if you missed it (here on YouTube). If you are old enough, you might know Bill Nye as the amiable “Science Guy” from his highly-regarded science show that ran from 1993 through 1998. Mr. Nye continues to be a passionate advocate and popularist of science. 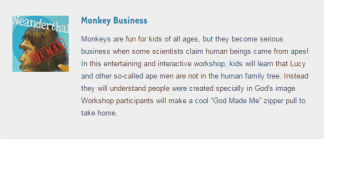 “Learning” at the Creation Museum

His opponent, Mr. Ham, was and is the President of the Answers in Genesis Ministry and is a tireless evangelist preaching young Earth creationism – mainly targeting kids. Mr. Ham is a key principal behind the Creation “Museum” (website) – a Biblical-themed amusement park that you may have glimpsed in the film Religulous by Bill Maher.

As I listened to the specious and frankly ludicrous arguments put forth with such conviction by Mr. Ham (see here), I could not help but wonder whether belief is far too mealy-mouthed a word for what Ham and those like him suffer from. Is not delusion is a far more accurate word to describe his kind of thinking? And if so, is it really helpful to be so very reluctant to call it what it is?

Now, before the psychologists amongst you get all up in arms that I’m diagnosing my fellow human beings, let me assure you that I use the word delusional purely in a lay sense, not as any kind of clinical diagnosis. But just because the word has particular meaning in clinical settings, does not mean we are not allowed to use it in a more general sense. We don’t need a judge to certify certain criminal activity as criminal and we don’t need a priest to proclaim certain behaviors as evil. We are perfectly free to do so as well.

For a fair and impartial definition of delusion we can most conveniently start with Wikipedia (go to link), which defines it as follows:

“A delusion is a belief held with strong conviction despite superior evidence to the contrary. As a pathology, it is distinct from a belief based on false or incomplete information, confabulation, dogma, illusion, or other effects of perception.”

That definition establishes a very clear distinction between belief and delusion, one which is easily recognizable at least at the extremes. A belief is simply an unsupported conclusion based on insufficient or incorrect information. A delusion is a belief that persists regardless of any amount of evidence to the contrary.

In the case of Ken Ham, his creationist views go far beyond a mistaken belief based on false or incomplete information. He maintains his unalterable convictions despite incomparably superior evidence to the contrary. No doubt, he would argue that the evidence for evolution is not actually superior, but any delusional person would similarly deny all evidence contrary to their delusion. Any objectively rational person could not help but conclude that the evidence for evolution goes far beyond merely superior to overwhelming and that the convoluted arguments that Ham puts forth to deny this evidence are utterly irrational.

According to Wikipedia again, delusions are further subcategorized into four distinct groups. One of these, the “Bizarre Delusion,” is defined as follows:

“A delusion that is very strange and completely implausible; an example of a bizarre delusion would be that aliens have removed the reporting person’s brain.”

I contend that the thinking of Ken Ham and other evolution deniers should be fairly and accurately categorized as a Bizarre Delusion. Their creationist views are certainly “completely implausible” and it would be considered “very strange” if they were not so commonplace. It is important to recognize that they have studied this a lot, and do not simply hold a completely uninformed and clueless belief in creation like presumably say, Rick Perry. And they are evidently not just lying about their belief like at least some other Conservative politicians. They are truly delusional.

Words matter and they should be used accurately. In principle, if a more accurate word is available it should be used. It seems undeniable that Bizarre Delusion is a far more appropriate word than belief to describe the thinking of Ham and those who share his delusions. But words also have power, and we should avoid words that convey implications or elicit reactions we would like to avoid. So even if the bizarre thinking of Ham and others like him is in fact delusional by definition, what value is there in labeling it as such? Doesn’t that just necessarily alienate those you would like to bring around to a less delusional way of thinking?

Even considering those possible undesirable side-effects, the word belief is neither accurate nor helpful in describing these delusions. It is not merely polite and non-confrontational but it actively helps enable these delusions. It suggests that such delusional thinking is harmless and even reasonable and acceptable when sheltered under the protective umbrella of other more rational beliefs. But delusions are seldom harmless and never reasonable or acceptable. Calling this kind of delusional thinking “belief” gives it more legitimacy than it deserves. If we were to consistently refer to this kind of thinking as delusions rather than as beliefs, we would more accurately communicate the true nature and real-world implications of these tangibly harmful assertions.

Certainly using the word delusion instead of belief would elicit a much more visceral response by opponents and allies alike, but I for one would welcome that reaction. I say call a delusion a delusion and stand by the implicit assertion that such delusional thinking goes way beyond mere belief and that it is irrational, unacceptable, and harmful. Calling a delusion a delusion may be just the hit of reality that these deluded people need, or at least those influenced by them need, to honestly reconsider the soundness of their reasoning. At the very least, it may give some people, politicians in particular, some hesitation in associating themselves with these delusional ideas.

So the next time someone espouses delusionary thinking, consider calling it out (nicely) as delusion. Instead of responding with the customary “I respect your beliefs but I don’t share them,” you might say something more provocative like “sorry but I can’t give any credence to such delusions.” If the other party questions how you dare characterize their sincere, heartfelt belief as a delusion, you should be able to give them a very clear and compelling justification for your use of that word. Or just refer them to Wikipedia.

But do not overuse it. Although one could arguably call any belief in god delusional, to do so would only dilute its effectiveness. There is a wide grey spectrum between belief and delusion. Reserve the label of delusional to those like Ken Ham who are clearly at the delusional end of the spectrum.

Here is an extra credit homework question for you. If Ken Ham has clearly slipped from belief into delusion, how far has he slid down the slope from delusion to insanity?

3 thoughts on “From Belief to Delusion”