We all know it.  Our democratic government isn’t all that democratic. It is inherently corruptible by the influence of big money – obscenely so since the Citizens United ruling. That big money necessarily compels our legislators to work for the short-term interests of wealthy individuals and big business, rather than for the long-term common good.

The most common response to this reality is resignation. Well yes, our system may not be perfect, but it’s the best we can do. How defeatist and unimaginative is that? We certainly could do a lot better if we only had the will to do so. We could enforce far stronger conflict of interest rules for our legislators – the same sort of rules we already enforce for judges. Oh we nip around the edges, passing token campaign and conflict of interest regulations, but nothing that would fundamentally reduce the river of big money flowing into government like a raging river. But we could.

And there are more fundamental things we conceivably do. Just brainstorming here, but I’ll offer one such idea. Feel free to use it if you ever start your own country or overthrow a government. 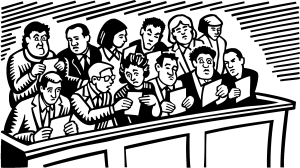 My form of government would be a “Jurist Democracy.” In my Government by Jury, legislators would propose legislation but could not pass it. To enact their proposed legislation, lawmakers would function as advocates, arguing the cases for and against the proposed legislation based on their own ethics, or their constituents, or their financial backers just as they do now. A non-partisan judge would preside over a Legislative Hearing and ensure that all evidence is vetted and all rules are followed. Once both sides have presented their arguments and their expert witnesses, a jury of ordinary people would retire to discuss and rule upon the proposed legislation. Jury selection would be conducted just as it is for criminal cases. The citizen-jury would decide whether a strong enough case had been presented and would make the final decision on whether the proposed legislation should be passed into law. Teleconferencing could eliminate previous geographical limitations.

No claim of a panacea is made here. Certainly this system would be neither perfect nor foolproof. Games could still be played by the legislators; horses traded, bribes offered, and so on. We would have to be assiduously vigilant to prevent or punish malpractice and jury tampering. But we know how to do those things.

And these corruptions will happen in any system. The key difference here is that at least we have removed the final decision from those who are most directly corruptible. If the legislators cannot convince twelve reasonable citizens that their legislation is good for the country then it does not deserve to be made into law. I for one would be much more confident that twelve impartial citizen-jurors would on the whole make better decisions than career politicians.

And I don’t buy the argument that citizen jurors could not understand the issues involved sufficiently to render intelligent decisions on complex issues. That sounds a lot like medieval priests who maintained that they alone could interpret the word of god for the common man. In fact I have far stronger concerns about the impartiality and expertise of professional lawmakers (many of whom do not even believe in evolution), and trust that if a bill cannot be explained to reasonably smart people is it probably too convoluted to pass. This idea that a bill is too complex for ordinary folk is mostly just used as an excuse to make our government less transparent and more susceptible to the disastrous impact of small print obscured within intentionally complexicated legislation.

This Government by Jury would be far more democratic because it would directly involve large numbers of citizens directly in the process of governing. I for one at least, would be far more willing to put my faith in the good sense and civic-mindedness of 12 random individuals than in professional legislators who are saturated in conflicts of interest starting with keeping their jobs and their positions of influence within the system.

It is pretty much impossible to put forth any idea that has not been thought of before. In his article called “Government by Jury” (found here), Stephen H. Unger from Columbia University discusses this general concept in greater detail and provides additional references. His suggestion is to conscript citizens into some longer period of service. I suggest that legislative jurors could be recruited only to decide one piece of legislation with minimal modifications to our current system. We recruit juries to make decisions in criminal and civil cases of comparable complexity. To recruit them for longer periods of service would include fewer citizens, would be much more logistically difficult, and would introduce more possibility of the very sort of corruptions that we are trying to avoid.

Ideas such as these should be discussed more often, more openly, and more seriously. They help stimulate real innovative, out of the box thinking rather than restricting ourselves to ideas that do not disrupt the current dysfunctional status quo. Merely raising and discussing proposals like this makes it more likely that legislators will consider more substantive conventional measures to improve the integrity and effectiveness of government.