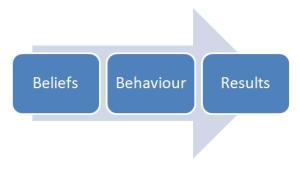 Beliefs drive behaviors and behaviors produce real-world results. If beliefs are mistaken, those results are probably suspect. To improve results we must ensure our beliefs are valid.

But can we atheists ever convince any believer that they are wrong to put their faith in fantasies? Indeed, can anyone ever even change anyone’s mind about anything? Most people would answer this question with a resounding no! The prevailing view is that no matter what evidence or logic you put forth, people are unwilling, even incapable, of ever changing their opinion about anything – let alone their deeply held beliefs.

Do you think that is at least somewhat true? If so, let’s test it by seeing if I can change your mind about changing your mind.

You almost certainly believe that your own mind can be changed. You are probably confident that if you are presented with reasonable proof you will adjust your beliefs accordingly. Well like you, everyone else believes the very same thing about themselves. Either you are the only one with this capacity while everyone else is deluded, or you are as deluded as everyone else, or everyone else is actually quite capable of changing their minds just like you.

I’m pretty confident it’s the last option. One proof is simply that we are here. We could not have survived the gauntlet of evolution without a tremendous ability to adjust our beliefs in response to new information. It is unreasonable to think that we could have adapted to a rapidly changing world without that innate capacity. And it is consistent and reasonable to assume that this malleability cannot inherently differentiate between religious beliefs and beliefs about anything else.

Another proof is that we actually see beliefs change all around us all the time. Our beliefs have been and are being continually shaped, even transformed, by sales and marketing, education, culture, indoctrination, religion, brainwashing, media, personal experiences, life events, new information, and a host of other influences. Indeed, beliefs are some of our most fluid of ideas because they are not fettered by physical constraints. Missionaries prove this every day.

Sure, you are quick to say. It’s easy to adopt beliefs, but once formed it’s virtually impossible to eliminate them. But religion itself disproves that idea too. The mere fact that organized religion must expend such an incredible amount of resources to instill and maintain their fantasies acknowledges the inherent fragility and vulnerability of even the most deeply held beliefs.

Still, it is understandable that one might come to the conclusion that beliefs are impervious to reason. Most of us personally never seem to succeed in convincing anyone of anything. Whenever we try, whenever we put forth what we think is a clearly indisputable rational argument, we seem to be talking to a brick wall.

No doubt it is quite difficult to change minds. But that doesn’t make the effort futile. Consider that dating is one particular form of persuasion. For many of us it’s frustratingly difficult to find a date let alone true love. We can’t seem to convince anyone we’re worth dating and so we conclude that dating itself is hopeless. But people all around us do it all the time and we can too. And as with dating, there well-known techniques that have proven to work extremely well in the art of persuasion in general. These include establishing trust, reframing the debate, making it personal, making it their idea, systematically dismantling rationalizations, and moving the other party along in small incremental steps.

So we should not be discouraged if our efforts to evangelize atheism do not seem to yield perceptible results. Our collective efforts do matter. Sure, they are unlikely to be rewarded with some “come to atheism” epiphany. But we must trust that every little drip, drip, drip of reason erodes away at the brittle sandstone upon which religion is constructed and does make a real difference even if we don’t often see it.

And as my final proof, do you feel even a bit more optimistic about your chances of having a real impact on individuals and on society? If so, I have changed your mind at least a bit. If not, that only proves that I failed to make my case or that you cannot perceive how your thinking has been influenced. Either way, I rest my case.

This article written by me was first published in the New York City Atheists July Newsletter and I reprint it here with their kind permission. NYCA holds monthly meetings with great speakers on topics of general interest as well as a large number of more focused meetings and events. Even if you don’t live in NYC, you can still find tons of resources on their website (found here).