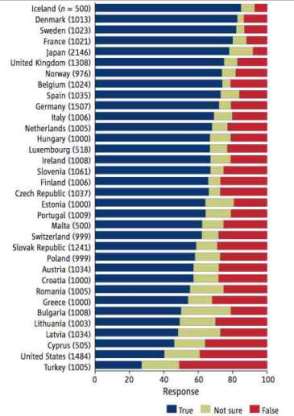 We have all seen these ubiquitous bar charts showing the level of acceptance of evolution by country. It’s fun to see how different nations are doing in the evolution standings and I’ve got a few choice things to say to some of our rivals.

First to Turkey (from maybe a third of Americans)… Thank You! Based on this totally fair litmus test we would clearly be THE stupidest, most insane people in the world if not for you. Don’t change Turkey, we love you!

But to Turkey again (from the other two-thirds of Americans)… Damn You! Were it not for you we Americans would be 1st in doubting or outright rejecting this evolution nonsense. Watch out Turkey, we’re training a new generation to overtake you!

Now to you Iceland. I’m really happy you’re at the top of the list. We all know you’re dominated by a race of gorgeous super-women adapted to the harsh climate and long nights, so you have direct proof of the survival of the fittest. It’s only fair that you top the litmus test for intelligence and sanity since what else do you have up there to be proud of except for giant volcanos and mossy green Matrix-themed landscapes.

To you French, nice work edging out Britain. Take that Brits! It must be especially humiliating to lose out to the French on this, especially considering that Darwin was one of your own. Way to blow an early lead and a big home-field advantage.

And Japan, way to go! Nice to see you sitting so high up in the standings. However you do know that Haruhi Suzumiya counts as a god too right? Just making sure.

Now, ignoring all those unremarkable countries in the middle, we come to Latvia and Cyprus near the bottom. Hey Cyprus you have a ways to go to catch up with Latvia, but if you can find a public school in America where the teacher isn’t too afraid to teach evolution, you could send like 30 exchange students there and overtake Latvia easy.

Finally, we need to mention a country that is conspicuously missing… China. Guess we don’t need to worry about what the biggest and most populous country in the world thinks. After all, they’re all the way over there in like… China. Actually China would be at or near the top of the list as they have perhaps the highest rate of unqualified acceptance of evolution in the world. But according to my Christian friends they are cheating yet again. They tell me that Chinese people only believe in evolution because they are mind-controlled by their dictatorial government. Isn’t that like totally unbelievable?

But views on evolution are far more convoluted and nuanced than this simple chart reflects. In some countries an acceptance of evolution somehow does not correlate with a rejection of creationism. Apparently while 73% of South Africans say they never heard of Darwin or evolution, 42% of them nevertheless agree with it. Having lived in South Africa this makes some bizarre sort of sense to me.

But I also lived in India, and I’m still perplexed how 77% of them accept the science of evolution as valid yet 43% of them also believe that life on Earth was created by God and has always existed in its current form (citation here). The Indians are indeed complex and mysterious folk.

Then there is America. Here is a truly interesting statistic. Even though 71% of Americans surveyed profess to be familiar with the science of evolution, roughly that same amount reject the science or think it is inconclusive. Evidently the scientific training of these Americans is SO advanced, they can find critical flaws in the “theory” that generations of scientists have failed to recognize.

It is also interesting to note that national wealth has a very strong correlation with the acceptance of evolution. In every case, the wealthier a nation becomes the more likely its people are to accept the science of evolution. 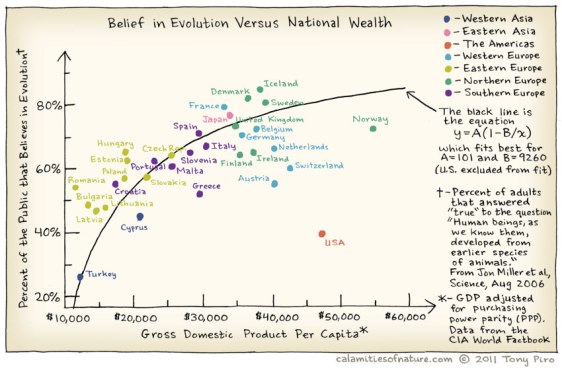 Well, there is that one anomalous data point off to the lower right there. Yup, that’s America again, way, way off by ourselves. We are by far the wealthiest nation with the lowest acceptance of evolution. We win after all!

Better yet, similar charts of health outcomes, education, wealth inequality, and many other measures would all look essentially the same. Overwhelming proof of that American Exceptionalism I keep hearing about!