People are rightfully concerned about robotics and automation costing us jobs. A report issued by the World Economic Forum early this year (see here) projected that 5.1 million jobs will be lost by 2020 across the 15 leading economies. This loss is attributed to “labor market changes” which includes robotics and automation. But for sake of this discussion, let’s blame robots for all 5.1 million lost jobs.

Tim Worstall, unsurprisingly a contributor to Forbes Magazine, puts this number into a less gloomy light (see here). He points out that while this 5.1 million figure sounds huge, it is out of a total labor pool of about 1.68 billion workers. This translates to a projected unemployment increase of only 0.3%, well below the noise level in these projections. Coincidentally, I wrote a recent article about how statistics are often reported in a very misleading fashion (see here). 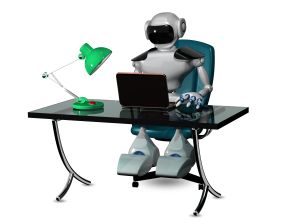 Of course job loss is not the only concern or even the major concern. The number of people forced to retrain and change jobs is not included in these projections. Certainly jobs always evolve, but periods of rapid and widespread job disruption are nevertheless painful and difficult. Even those who can transition through the major upheaval being caused by automation and globalization may find themselves forced into jobs they no longer love. More importantly those new jobs may pay far less than the old ones. This loss of standard of living must be mitigated through responsible corporate and governmental policies.

But I contend that human nature will win out in the end over automation. Automation ostensibly promises greater efficiency but this is simply counter to human nature. I’ve written in the past about the tendency of really smart people to come up with astoundingly convoluted solutions to simple problems (see here). Given that tendency, smart people will naturally direct automation toward enabling more complicated systems rather than merely replacing humans in existing ones.

Our tendency toward complication is synergistic with another characteristic of human nature – empire building. In my book on business management (see here), I talk at length about how inefficiency is ironically desirable in the workplace. Contrary to typical intuition, deadwood workers are assets while high-performers are obstacles to the inherent goal of managers to expand their head counts and their budgets. Therefore, automation will be unavoidably applied in such a way as to increase human headcounts by increasing complexity rather than decreasing headcounts through greater efficiency.

Here’s just one example. Ten years ago I designed and developed a customer management system for my employer for negligible cost. Ongoing support costs were also negligible. But this simple, robust, and powerful system would never be replicated today. Now there are new “automation” frameworks available designed to make this easier. But, despite all the promised efficiencies of moving to an automation platform, no jobs were lost in this transition. Quite the opposite, implementing this new system required literally hundreds of people and tens of millions of dollars, not to mention a huge explosion in personnel required to support it moving forward. The benefits are very debatable, but the costs are not.

In this as in many cases, the automation that one might fear would cut jobs proves to dramatically increase the number of jobs needed to support far more complex and fragile systems. Automation, when implemented in accordance with our human nature and self-interest, is likely to create many, many new jobs overall. While this won’t help with the disruption problem, loosing net jobs overall is not likely to be a problem.

Human nature, and the benefits that inefficiency and complexity offer for empire-building, effectively protects us from a future where automation takes over all our jobs.

1 thought on “An Alternate View of Automation”