For those of you who are too young to have grown up on it, The Twilight Zone was a science fiction show that featured a shocker ending, typically in the form of a sudden reversal of perspective. There was one episode, for example, when an astronaut to Mars is welcomed by aliens who greet him warmly and offer him a comfortable Earth-like room with all the amenities. Everything seems wonderful until he notices a sign that says “Earthling in its natural habitat.” Then the wall drops open and he is stunned by the realization that he is actually in a zoo (see here).

Last night was a real life Twilight Zone shocker ending. There we were. My wife and I and all our friends were in an uptown Manhattan apartment expecting to watch Hillary declared the winner within the first hour – or two at most – before popping our champagne. As the first states went to Trump, many reassured us that there was absolutely nothing to worry about. Hillary did not need that state to win. As each subsequent state fell to Trump, we kept clinging to the next certain path to victory. When it finally became undeniably apparent that Hillary was out of paths to 270, the utterly stunned looks of shock and disbelief were every bit as profound as if we suddenly discovered we were actually exhibits in a Martian zoo.

This is the Twilight Zone ending of this long election cycle. All of us who opposed Trump lived under a delusion of absolute certainty that all those crazy Trump people were living in some artificial bubble created by Fox News. But suddenly we had to accept that is we who have been living in the bubble, not them. It is we who thoroughly denied the reality of a disillusioned, hurting, and profoundly desperate majority in America. It is we, including those in the media, whose bubble of relative affluence did not allow us appreciate or even imagine that too many of our fellow Americans are so fundamentally damaged by our system that disqualifiers like misogyny and all the rest are merely frivolous preoccupations of the privileged classes.

Those with all the power are always shocked and surprised when the “masses” rise up. Many slave-owners in the South were probably mystified to learn that there was so much discontent amongst their slaves. In every country when there is a popular revolution, the leaders and those who are well off live in their own bubble that only gets penetrated when the workers rise up in some form of Marxian revolt. They are always stunned and shocked.

That may be exactly what we have seen here. In recent decades SO much wealth has gone to the upper classes, siphoned by the rich like vampires directly from the life blood of the working class, that Karl Marx would be nodding his head saying “I told you so.” He would probably only be surprised that it took so long for reality to burst through our happy little bubble.

In his recent Op Ed, Paul Krugman talked about the dangerous attraction of voting Libertarian (see here). I’d like to second this. Well actually from my perspective he is seconding me, but he did hit “Publish” a few hours before this planned Monday morning post.

Look, Paul said it well but here’s my unique take on this. I have long advocated voting third-party to anyone who would listen. I argued, soundly I still think, that Progressives consistently vote out of fear and have failed to play the smarter and longer strategic game. By failing to take a stand for change and to lose a Presidency or a Supreme Court Judge in the short term, we consistently vote for the “lesser of two evils.” This has only played into the hands of the Conservatives in which they win either way, maintaining the status quo and moving the center methodically ever further to the Right with each election cycle. Unless we are willing to back a third party candidate in large numbers and lose a battle, sacrifice a Pawn or even a Queen, we cannot hope to win the war.

But there are rational limits to everything, and even in war there are some battles that we cannot give up; a hill that we cannot allow to be taken, a Rubicon that cannot allow the enemy to cross. If Jeb Bush or John Kasich were the Republican nominee, I would still be advising the long game. However, Donald Trump totally changes my calculus. A pathological liar who rivals Kim Jong-un only in his level of obscene narcissism, simply cannot be allowed to assume a position of such immense power. Allowing a reckless buffoon like Trump to take office in America, even if only for four years, is utterly unacceptable.

As much as it catches in my throat to even say it, voting third party is simply foolish in this election. I admit that I am motivated by fear here. I am afraid of the real, existential threat of Donald Trump. Sometimes fear can save our lives.

Even if one grants the silly Fox meme that Hillary is a crook, a crook in the White House is infinitely preferable to an utterly self-serving compulsive liar.

One of my biggest complaints and concerns about Hillary is that she is too hawkish. But recklessly insane Donald Trump has already said he would launch missiles if some guys give the finger to personnel on one of our Destroyers! There is absolutely no comparison here. Hillary the lesser of two evils? Absolutely, by an incalculable margin.

And don’t fool yourself. Your vote matters even if you live in a safely Blue State. Unless Hillary wins with an overwhelming popular vote, she will have no mandate and the forces that spawned Trump will only feel encouraged and emboldened to block her every effort and to keep giving us more of the same extreme Conservatism. 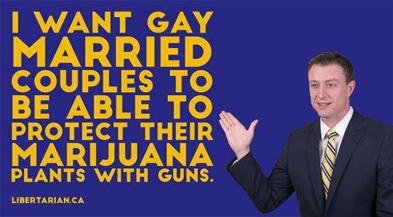 If, after all this, you still feel compelled to vote third-party, think about who you are supporting with your symbolic vote. Johnson and Weld are Libertarians. They claim to be “fiscally conservative and socially liberal.” But this is a HUGE LIE. They are only socially liberal in as far as they support the legalization of pot and a woman’s right to choose. But they also support privatization of almost every social institution including education, the right to own assault weapons, eliminating all corporate taxes, instituting a hugely regressive consumption tax, trusting in the private sector to stop climate change, and eliminating almost all regulations. The list goes on and on. These guys are not socially liberal since all of their “fiscally conservative” positions are actually socially conservative positions painted up as fiscal common sense.

If you vote Libertarian, you are not just saying you reject the status quo, you are also saying you support all of their extreme Libertarian positions that are too far Right for even mainstream Conservatives to accept.

One final plea. If you DO still feel compelled to vote third-party, strongly consider voting for Dr. Jill Stein. The Green Party is not an ideologically blinded wolf in sheep’s clothing like the Libertarians. They are truly sensible, rational, intelligent, and represent real Progressive change. If we were not faced with the horrifying specter of a Donald Trump Presidency, I would be proud to vote Green. Vote for them down ticket as much as you can.