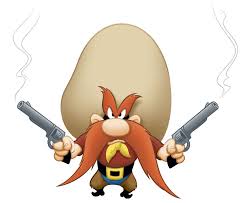 But gun spokesperson Yosemite Sam reminds us that guns don’t kill people. After all, as hunting enthusiast Elmer Fudd points out, even if there were no guns those kwazy wabbits would just murder you with carrots. Wile E. Coyote, acknowledged expert on absurdly dangerous weapons, adds that even without guns some deranged Tasmanian Devil could run amok hacking preschoolers up with an Acme™ turbocharged meat cleaver. The entire cast of Looney Tunes agrees that the obvious and best solution to the plague of too many guns is yet more guns in the hands of animated characters who really, really love to shoot them. They maintain that in their cartoon-view, guns are not actually the problem anyway. Mental illness is the real problem.

I could not agree more with our Looney Tune friends! Mental illness is the real problem and we should focus our attention on that. Even though so-called real-world “scientific” studies have shown that there is no correlation whatsoever between violence and a history of mental illness (see here), anyone who shoots up a school or movie theater must obviously be mentally ill. And what does “correlation” really mean anyway? No, clearly mental illness is the problem, not guns. Case closed!

So then the only real question is how to identify these mentally ill people BEFORE they rip through an abortion clinic using their legally-purchased semi-automatic weapons supercharged with Brownells™ high-capacity magazines. Hmm. Let me think a second… could there be some factor, some objectively measurable indicator, that clearly flags individuals as mental health risks to society? Anything at all?

I know! How about we red-flag people who buy semi-automatic weapons with high capacity magazines as dangerous risks by virtue of mental illness? Clearly, people who are so paranoid, pathologically fearful, and sociopathic that they feel compelled to buy semi-automatic weapons with high-capacity clips – especially if they buy many of them – are mentally ill and need help. Maybe we should “register” them somehow so we can “monitor” their activities and administer appropriate mental health services.

We should be reasonable about this of course so that those few non-crazy gun owners, or at least those few crazy but harmless gun owners, are not unduly monitored thereby wasting our surveillance capacity. We should restrict our high-risk group of crazy gun owners to those who buy more than, say four mass-murder machines. High capacity clips should earn them a double-red flag status.

How many people would this high risk group include? I took the liberty of doing some back-of-napkin calculations. Roughly 24% of American adults say they own at least one of the estimated 310 million guns in circulation in our country. So, out of a total 245 million adults that means that 59 million of us are gun-crazy. Of those, 48% own 4 or more guns. That means that roughly 12% (30 million) of Americans are profoundly gun-crazy. That list would be whittled down to the subset of those that own four or more high-capacity modern non-hunting weaponry who are therefore profoundly and dangerously gun-crazy.

This “registration” and “monitoring” of high-risk mentally ill individuals is clearly quite doable. Not only are these mentally ill gun owners readily identifiable simply by tracking their gun purchases, but the numbers are manageable too. The terrorist watch list monitors over a million people. Amazon manages upwards of 300 million customer accounts. We routinely issue and manage hundreds of millions of driver’s licenses without breaking much of a sweat. So clearly monitoring our population of profoundly and dangerously mentally ill gun owners is well within our capability.

So let’s start a movement. We don’t want to unfairly blame guns when mental illness is the real problem. So let’s focus on that and provide the mental help needed to all those individuals flagged as mentally ill by virtue of their insane gun ownership. Maybe we could start a White House Petition. Let’s force the government to help these mentally ill gun owners to get the help they need and the intervention they require.

2 thoughts on “Yosemite Sam on Target”