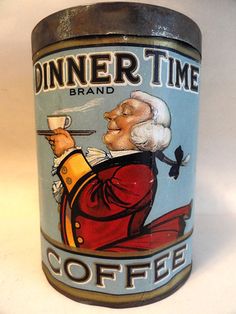 I’m sure you have heard the term “tin pot dictator.” It refers to “an autocratic ruler with little political credibility, but with self-delusions of grandeur.” This pejorative was coined in the early days of the British Empire and it associates certain rulers with the cheap, disposable containers used before the creation of the modern tin can. Like the one on the right, these cheap cans boasted labels that portrayed the contents in a highly overblown and pretentious manner. But the common people were not all fooled. They knew full well that Dinner Time Brand coffee was not exactly the Royal experience promised on the label. Thus the term “tin pot dictator” spoke volumes to them.

Dictators are not uncommon and not limited to only a few flawed countries. The Ranker website has a list of over 100 infamous dictators (see here) from a broad spectrum of nations. Not all of these were true “tin pot” dictators, some were quite capable dictators. Many of these dictators came to power through fair elections riding tremendous popularity with their voters. But I think it is safe to say that few of those voters thought they were voting for a dictator when they voted for a dictator. In fact it is probably safe to say that few people in those nations thought a dictator could ever take power in their country.

Now, in America, we have also succumbed. Deny it at your peril, but we have elected a wanna-be strongman dictator. Donald Trump is unquestionably “an autocratic ruler with little political credibility, but with self-delusions of grandeur.” Even if it is not his conscious intention to become a strongman dictator, his personality and style of leadership will inevitably lead him there. Bury your head in the sand if you must, but we now have a dangerously unstable tin pot dictator in power.

Psychologists generally agree that most dictators suffer from a group of 6 major psychological disorders including sadistic, paranoid, antisocial, narcissistic, schizoid and schizotypal. While I’m not a psychologist, it seems clearly evident that Donald Trump also suffers from these disorders to at least a sufficient level to warrant deep concerns. He is disturbingly similar to Kim Jong-Il in his worldview, personality, and behaviors.

If Trump succeeds in his aspirations or even allowed to follow his natural inclinations, America will become another tin pot nation. Trump will continue to be driven by his personality disorders in more and more bizarre ways. He will continue to aggrandize and enrich himself to the exclusion of all other considerations. He will inevitably take us and the world down a path that we may not recover from for many generations, if ever.

Only one question remains, having  foolishly empowered this fledgling tin pot dictator, will we now accept his increasingly dictatorial rule? Will we allow our newly elected tin pot dictator, so disturbingly similar to other crazy strongmen like Kim Jong-Il, to turn our once great nation into yet another pathetic tin pot dictatorship?

That will not remain a rhetorical question for long. We will soon have our answer.