“All things in moderation” is a pretty sound truism. It is true for most things, but there are exceptions. Lead is never good to ingest even in moderation. Likewise, activism is not usually very effective and can even be harmful when taken in moderation.

Imagine you were an abolitionist living in the 1760’s. Would you demand a complete end to slavery or would you politely request limits on slave whippings?

Or how about if you were a feminist in the 1860’s? Would you demand equal rights or would you have request (demurely) that women be allowed to smoke in public?

How about if you were a civil rights activist in the 1960’s? Would you demand nothing less than equal rights or would you go out of your way to show how nonthreatening you are by simply asking to sit a few rows further up in the bus if all seats further back are taken?

This was the very question that troubled Martin Luther King in 1963. In his “Letter from Birmingham Jail” King pushed back against his well-meaning supporters and their strident calls for moderation. He correctly assessed that these friends were a bigger hindrance to the achievement of equal rights than were his opponents. The modest calls of his so-called allies undermined his own demands by making them seem unreasonable and even radical in comparison.

I feel his same frustration. In all the causes I care about, I feel thwarted by fellow “activists” who demand only minor incremental improvements with negligible benefits. Often doing a little bit is worse than doing nothing at all. It often gives the impression we’ve already “fixed” that issue, making it even harder to come back later for real effective change.

That was certainly true for Healthcare. Failing to demand national healthcare and accepting at least a public option was a tactical mistake of President Obama from the beginning. Now we are stuck with a private for-profit “solution” that addresses none of the systemic private-market abuses of our healthcare system. 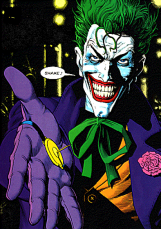 In fact, President Obama took years to figure out that his moderate reasonable approach in all areas were doomed to fail. Over and over he reached out across the aisle with modest requests of Jokers in Congress, only to accomplish less than nothing. It took him what, 5 years of getting joy-buzzed to finally understand that moderation did not make his opponents any more reasonable or receptive.

Bargaining isn’t a new or complicated skill. In bazaars all across the continents merchants show us how to do it. You demand 10 times what that trinket is worth and finally settle for “only” 5 times its actual value. Only a fool starts out with its actual value and hopes to get anything close to it.

Yet far too many activists fail to apply these simple bargaining rules. In a vain hope of looking reasonable, they ask for next to nothing and if they are unfortunate enough to get it, it becomes extremely difficult to come back for more. The other party always wins when they give away next to nothing. Yet we see these moderate activists in every important area diligently undermining the “extreme militant activists” who might without their “help” bring about real change.

Healthcare: What we asked for and got was a “reasonable” giveaway to the private healthcare sector. What we should demand in the next round is nationalized healthcare. We may be willing to settle for a quality low cost public option.

Gun Control: What moderates call for are “sensible” expanded background checks and mental health services. What we should demand is a near total crippling of the gun industry and close security monitoring of those who own certain guns. We might settle for reestablishing the right to sue gun manufacturers and dramatically increased gun controls and insurance requirements.

Climate Change: What moderates call for are “realistic” industry-friendly systems like carbon trading. What we actually have to achieve in order to save our planet is a near total shutdown of carbon-based fuels and greatly expanded emission limits. Our planet simply does not have the time for moderation on this.

Campaign Financing: What moderates call for are modest reforms that do nothing except create yet more loopholes and workarounds. What we should demand is a complete prohibition from politicians receiving any outside money or working in the private sector for 10 years after leaving office rather receiving a generous government pension. We might settle for public campaign financing.

Atheism: “Non Angry” atheists call for mutual respect and a live-and-let-live attitude toward religion. What we should demand is that magical thinking, like racist or homophobic thinking, not be taken seriously in any aspect of civil society. What we might settle for would be a far stricter enforcement of the separation of church and state including an elimination of all religious carve outs and tax benefits.

War Funding: Our “pragmatic” moderates are thrilled if we can just limit the amount of annual increase in the Pentagon budget. What we should call for is a 90% reduction of our military budget and a retuning of our military industrial complex. Perhaps we might settle for only a 50% reduction.

Income Disparity: Moderates beg for a slightly higher minimum wage. What we should demand is a steeply graduated progressive tax up to 90% with a maximum income cap based on some multiple of a guaranteed minimum income. We could possibly negotiate on the threshold levels.

Presidents: Moderate liberals feel lucky if they can elect a President that is only slightly to the Left of their Republican opponent, even if that takes us much farther to the Right than before. They should support Bernie Sanders and maybe settle for Hillary Clinton. But they should not vote for her out of fear. The timidity and fear of our liberal moderates ensures we keep losing ground and that is why our nation has drifted steadily Right for nearly 40 years.

In the end, moderation in activism does more harm than good. Moderation does not ever sway our opponents or make the battle any easier. The effort to achieve ANY compromise is not significantly lessened if the demands are modest. Rather it is often easier to get ones opponent to accept a significant compromise if far below the demands. And in the end the ground gained through a small compromise of modest demands is far less than the ground gained by a large compromise on grander demands. Further, you often only get one compromise in a decade or more so incremental movement is often a delusion, or at least far too slow for the people or the planet involved.

But like President Obama, liberal moderates have no clue. They are neither bold nor smart and they generally lose the long game on every front by moderating each other with continual calls for moderation.