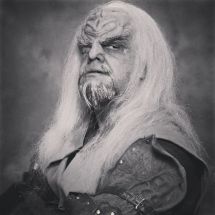 You probobly assume that we Americans represent the Federation of the Star Trek universe. Not really. If anything, we are far closer to the Klingons – say otherwise and I will let you taste my bat’leth! Like the Klingons, we may be inept at maintaining our infrastructure, at providing affordable healthcare, at ensuring a good education, a secure retirement, or a working wage… but we are truly exceptional at waging war. We have far more military might than all other human civilizations combined. Our immense “defense” budget is sacrosanct and we subordinate every other priority to sustain it. We bring our armies down upon anyone who dares challenge us and have been involved in over a hundred wars in our short history (see here). Admit it or not – like it or not – we are the Klingons.

You probably mistakenly assumed that Russia represents the Klingon Empire. But the Russians are more akin to the Romulans, favoring cloaking devices and clandestine operations to advance their insular goals. The European Union is probably the closest thing our planet has to a Federation.

But I say, don’t deny our Klingon side, embrace it! In fact, call upon it to battle the biggest, most deadly enemy threatening us – Climate Change. What would a true Klingon warrior do if faced with the threat of Climate Change? Well yes, they would unhesitatingly invade and occupy a nice planet like Bajor that has been responsibly managed by peaceful refugees. But if that were not possible, they would meet Climate Change in glorious battle.

I realize that declaring war on Climate Change seems hopeless, particularly after the election of the world’s most moronic climate-change-denying buffoon to the White House and the impending purge of any remnant of reason from our government. But Klingon warriors scoff at such defeatism.

My proposal is that we get ourselves into a war against Climate Change and bring the full wrath and fury of the American Army, Navy, Air Force, and Marines to bear against it. Our military knows how to win against all odds. I say bring it down upon Climate Change like a hostile fleet of Klingon Birds of Prey!

I know what you’re thinking. You’re thinking there’s no way our Republican-controlled Congress would ever declare war on Climate Change. But there is nothing easier than getting America into a war. We love our wars way too much to ever say no to one. And even though many members of the Congress don’t believe in Climate Change, we go to war under false pretenses all the time. We don’t need real reasons when any old aluminum tubes will do.

But you are right about one thing, Congress would need some compelling excuse – merely saving our planet is obviously insufficient. So what we can do is stage a False Flag operation to get them all riled up. Maybe we can plant rumors that the Russians are actually orchestrating Climate Change to spread Communism. Or we could “discover” Climate Change documents in Nicaragua that implicate the drug cartels. We could even stage a fictional attack purportedly made by Climate Change against an American Destroyer or a government building. Better yet, the CIA can merely insert a fake news story on Breitbart reporting that Climate Change gave American soldiers the middle finger. Really, any of the old tried-and-true methods for justifying a war should do just fine.

Once we do go to war against Climate Change, that evil CO2 will be routed. Our Navy subs can fire modified torpedoes to defend salinity in the North Atlantic Conveyor belt. Our Air Force can bomb CO2 strongholds in the Middle East. The Army can hold off rising seas on our Eastern seaboard while amphibious Marines assault mega tornadoes and hurricanes in the Gulf. The Coast Guard can protect polar ice caps. Special Forces will be needed for missions into other countries while the CIA conducts covert ops to take out the worst methane polluters. Homeland Security may have to go door to door to uncover traitors in our midst and I would not rule out drones or even space-based weaponry.

Seriously, we need to leverage our greatest asset in a global effort to reverse Climate Change. Hey, if it takes a military coup to get this war started, I’m all for it. I’m even willing to resort to chemical warfare in this case. Heck, go ahead and waterboard Climate Change if it gets results. After all, desperate times call for desperate measures. And even if we fall, we can at least save our Klingon honor and perhaps even give the surviving cockroaches their chance to evolve to be wiser beings than us.

We are Klingon! Today is a good day to die!!