“MadCow Madow claims I have a small penis… Wrong! Lie. Fak NEws!!! So Sad.   She is the one with tiny penis. Mine is the biggest ever! Tremendous. I’ll show her…”

4:23 AM Reince Priebus on call from President

Reince: I saw it. Yes Mr. President, I’ll clear our entire schedule… yes even the terrorism briefing. I know, they’re boring anyway. No we’ll keep the meeting with Putin. He makes you happy. Will assemble the full cabinet for an emergency meeting at 6 AM. OK bye.

5:30 AM Melania during breakfast with Donald

5:45 AM Personal Valet while lengthening President’s tie to penis level

Nikki Haley: No sir, again, we really don’t need to see it. We believe you.

Jeff Sessions: Have no fear sir, we’ll bring the entire Justice Department to bear against this Maddow woman. I never liked her much myself. She once made a totally inappropriate remark about my chin.

Rex Tillerson: I am not sure this actually rises to the level of an “International Incident,” but I’ll look into having that scope broadened.

James Mattis: Just to be clear, Mr. President, we can’t actually “nuke” an individual person. Yet. But we’re working on the technology.

Sarah: I’ll just say that the President has the hugest penis ever. No one denies that and it is just totally inappropriate for members of the media to be launching personal attacks like this against a sitting President.

Reporter: Have you seen it personally?

Sarah: No I have not but I don’t need to because everyone knows it’s the biggest. He’s the President after all. Next.

Reporter: How can you stand up there and communicate reports as fact that you have not confirmed to be true?

Sarah: I’ll have to check with the President and get back to you on that. Can we discuss another topic? There are many cancelled meetings today that are more important to the nation than this penis story which is totally fabricated by the fake news media.

Reporter: Sarah, we cannot find any records of Rachel Maddow making any penis comments that could be construed as maligning the President. Can you produce the tapes to substantiate this accusation?

Sarah: Those tapes will be coming.

Reporter: How do you respond to the leaks from within the Cabinet that this entire accusation is based on a dream that the President had this morning after eating an entire pepperoni pizza last night?

Sarah: Look, I’m not going to engage in who said what where or whether something was a dream or not or for that matter whether pepperoni pizza was involved. The President’s tweet speaks for itself and he has moved on. We should all move on as well.

Reporter: But it was just a dream!

Sarah: If the President dreams it, it’s real. End of story.

1:12 PM The President in response to a reporter’s shouted question

President: No I have not moved on. I will never move on until she apologizes personally for this small penis comment. I’m instructing my lawyers to file a libel suit against this Madcow Madow. I also have men looking into the size of my penis and what they are finding will shock you, let me tell you. That’s all I have to say. But I’ll just say that I have the utmost respect for women. No one has more respect for women than Donald Trump, OK? But the Madcow Madow isn’t really a real woman if you know what I mean…

3:54 PM Betsy DeVos on call with the President

Betsy: Yes sir, I got the pictures. Umm, thank you. Very impressive. Yes, I’ll definitely work on getting these put into education text books as soon as possible.

5:16 Dinner with Ivanka and Jarod

Ivanka: Well daddy, here’s one idea. We could pitch “The Biggest Penis Loser” to NBC. It would be a great vehicle to launch some new Ivanka Collection merchandise. Plus we could hold it at Trump hotels. Jared dear, what do you think.

Jared: <continues smiling and staring into the distance sagely> 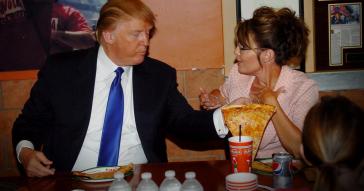 11:48 PM Personal Valet after being called into the Presidential Bedroom

Trump: Ok, if you’re sure. Oh and could you bring me another pepperoni pizza? It reminds me of someone that makes my penis even bigger.