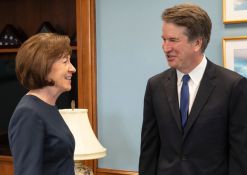 Senator Susan Collins has long been looked to as a rational, ethical, and principled moderate who surely would be willing to vote against her own party on issues of conscious. In fact, she has worked very hard to cultivate this image.

However after many years of encouraging platitudes from Susan Collins, and pundits predicting her near certain defection, she has almost always fallen in line with the Republican majority. Finally, her moderate facade has become too difficult to perpetuate with a straight face. Because of her long record of disingenuous and cowardly behavior, GQ Magazine published an article that asked whether Susan Collins is not actually more dangerous that Mitch McConnell (see here).

Part of the reason that Collins has gotten away with playing both sides for so long is because she is associated with the “white suburban woman” image. It is easy for us to assume that as a woman, mother, and grandmother she would never vote against the long term habitability of the planet, against a woman’s right to choose, against working families, or support sending our sons and daughters into needless wars. Surely as a white suburban woman she could never condone the actions of a disgusting, repulsive male thug in the White House. Yet she votes against the assumed interests and sensibilities of white suburban women, over and over and over again.

Over the last couple decades, pundits and advocates in the media keep pointing to white suburban women as our firewall, our great hope. We keep hearing how, just like Susan Collins, they will surely rise up on this next issue. On this next vote, they will be outraged and mobilized. The Republicans have surely taken their hateful agenda a bridge too far for white suburban women!

But the reality is that, like Susan Collins in particular, white suburban women in general almost always fail to vote they way we thought they would. Apparently they are never really as outraged and mobilized as the pundits assume they are, as the activists hope they are, or as the women themselves claim to be.

But Vogue published a more fact-based analysis (see here). The authors recount the long history of white suburban women and their voting against their own apparent self-interest. In my personal experience I know a woman who voted for Bush for a second term, even though he had sent her two boys away to fight in a contrived war. Her rationale was “yes he did, but now we need someone strong in the White House to bring them home safely.”

The Vogue article stresses that despite their long history of disappointment, we should not and can not give up on white suburban women to do the right thing. Nor should we disparage them as moral failures or hold them to unrealistic expectations while we neglect to expect more from white suburban men.

But at the same time, fool me once… fool me twice. We should stop expecting Susan Collins to vote with the Progressives, and we should likewise not believe claims that white suburban women will save us. While some advocates might like to make it so by claiming it is so, it may be that a false sense of complacency that white suburban women will save us, is self-defeating.