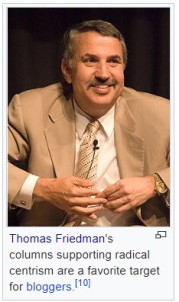 It must suck to be Tom Friedman right now.

Mr. Friedman is clearly wigging out, and I think I understand why. He recently wrote an NYT Op Ed in which he railed against the extremist positions of the current Democrat candidates (see here).  In it, he grossly misrepresented their positions in ways that surely he knows rise to the level of outright lies and he resorted to wildly exaggerated “end of the world” ravings about the dangers they pose.

But think of it from his perspective. Thomas Friedman has made a huge name for himself as a leading champion of radical centrism (see here). So for him, the current times are an existential threat. For him, it must be viscerally tribal. That was apparent when he appeared on Lawrence O’Donnell to discuss his article. He seemed panicked and frustrated and angry and defensive. In short, he seemed to be speaking from a place not of intellectual authority, but of gut-level lash-out emotion.

I suspect he is in this berserker frenzy because his radical centrist worldview, his tribe, is under serious attack for perhaps the first time in his long occupation of the middle ground. He has seen Donald Trump defy his radical centrist prescription for success on the Right and winning. He also sees the Progressive Left winning a lot of hearts and minds with their left-of-center ambitions. He sees that Joe Biden, the current flag-bearer of radical centrism, may not win the day. And most of all, he fears deep down that radical centrism is no longer a tenable position, suggesting that maybe it never was.

If non-centrist newcomers and their “radical” ideas continue to take hold and show success, that threatens the very foundations of radical centrism. The success of a progressive agenda would undermine a lifetime of preaching for moderation. He cannot allow his entire career, his very faith in radical centrism, to collapse around him.

So he lashes out.

And it is not just Tom Friedman, but also the many newscasters and pundits and politicians who are emotionally married to the radical middle. They cannot allow the Progressive Left to ascend. So they dismiss Elizabeth Warren as too ambitious, they call the Squad naive, and they label Bernie Sanders as a Socialist at every opportunity. They rush in quickly to defend Capitalism and all the tenants of centrism including incremental change and pragmatism and realism.

In his famous letter from the Birmingham jail, Martin Luther King identified “well-meaning moderates” as the most frustrating obstacles to meaningful change (see here). Similarly today, we still have a huge number of radical centrists like Tom Friedman who insist that it is too early, that we are asking too much, and that we should just be patient. They use any manipulation to make you feel afraid of any course other than radical moderation.

Unfortunately the planet Earth will not show us any further patience. Fortunately, more and more leaders are stepping up and refusing to defer to the evangelists of radical centrism like Thomas Friedman. More and more refuse to accept the artificial limits these “pragmatists” impose on what dreams we are allowed to dream and what bold new solutions we are allowed to embrace.

Personally, I hold no animus toward Thomas Friedman or all those passionate devotees of the radical middle, but I hope their worldview is discredited and crumbles beneath their feet. If not, the best we can hope for is too little too late.