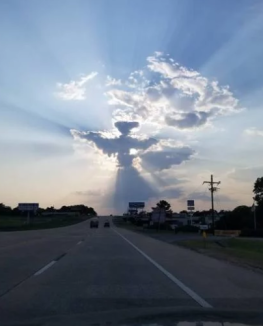 A recent article in People Magazine was entitled Texas Driver Spots ‘Spectacular’ Cloud Shaped Like an Angel: ‘How Awesome Is That?’ (see here).

Although the question was rhetorical – well actually it was meant as more a statement than a question – I’ll answer it anyway.

The reality is that at any given moment of any day from any point anywhere on Earth, there are clouds that we could imagine bear some resemblance to something other than a billowy mass of condensed water vapor floating in the atmosphere.

Some of these clouds might resemble boats, or alligators, or elephants, or pretty much anything really. The limit is our imaginations. So it is fun, but not particularly newsworthy, to take note of the wacky shapes that clouds happen upon. That is, unless the image is religious, and in that case it is apparently quite newsworthy.

The truth is that of all the clouds, or pieces of toast, or rotten peaches, or paint stains, that look like something, we don’t get really excited about these random resemblances unless they resemble an angel, or Jesus, or Mother Mary, or some vague Saint. All this random stuff is just random, unless it has a religious connotation. In that case, random stuff is inspiring, proof of gods hand in the world, miraculous, and fascinatingly newsworthy.

And I can see how a cloud pattern, or some lichen on a rock create powerful imagery. I had one such experience.

I was on the beach in Costa Rica watching baby tortoises dauntlessly plunge into the ocean only to be thrown back onto the sand over and over again by the uncaring waves. It was late afternoon and I glanced up, only to stare in wonder at the sky. Directly in front of me were the very gates of heaven. A glowing pathway lead up from directly before me to a shimmering cloud platform. Upon it stood two gleaming pearly gates, connected by a vibrant golden archway, highlighted by dramatic halos of light. Within the great arch, in the distance, was a glowing point of light so divine that it could only have been the glow of god almighty.

The sight was so photo-realistically detailed and delineated with vibrant color and perfect proportions that it made the Texas cloud angel look like a child’s watercolor. I gaped in wonder for a moment before I thought to reach for my camera. But by the time I fumbled to work it, the lines had begun to blur, the light to diminish, and the effect to become far more abstract. That singular moment was past. Within minutes the gates of heaven were once again just one more set of abstract cloud shapes.

Given that experience, I can understand how primitive people might be so inspired as to believe they had actually glimpsed a heavenly place revealed to them in the sky. I can understand how they might have taken this as proof of heaven. Or, perhaps, thousands of years ago someone glimpsed a sight very similar to my own and created our modern imagery of heaven based upon that one powerful awe-inspiring moment.

But what I cannot understand and cannot excuse is any modern person today believing that some vaguely angel-shaped cloud is particularly inspiring or reassuring, let alone believed to be a message from god. And I find it doubly disappointing that a news outlet, even one that is merely reporting human interest stories, would preferentially pick out these kind of “sightings” to report, thereby depositing yet another straw of religious delusion on the already straining back of the reason and rationality of our culture.